A few flies to come off the Bench 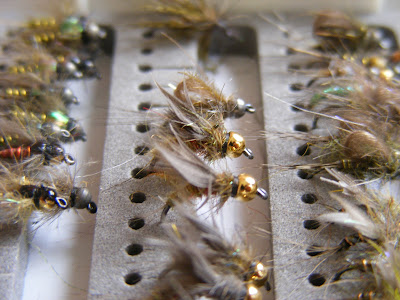 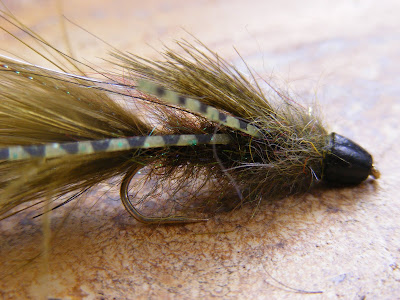 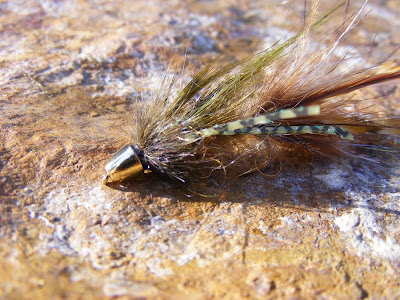 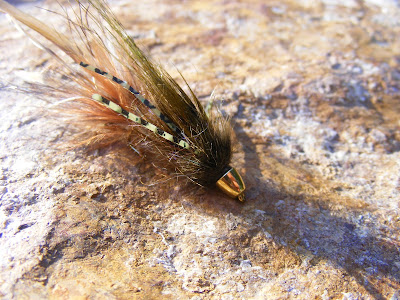 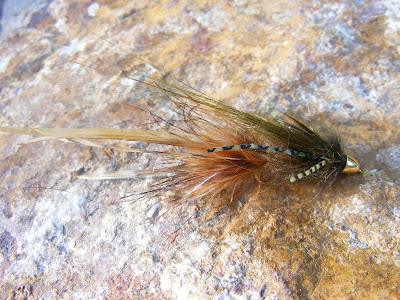 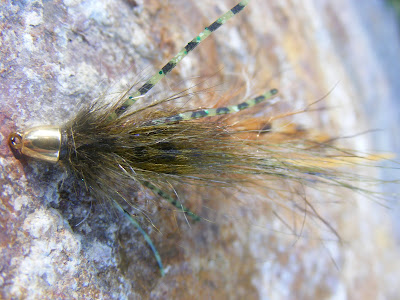 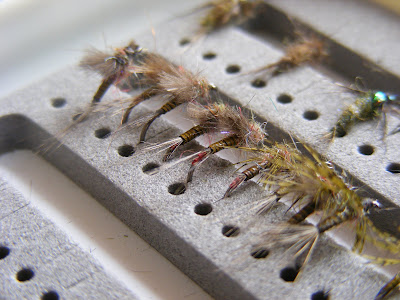 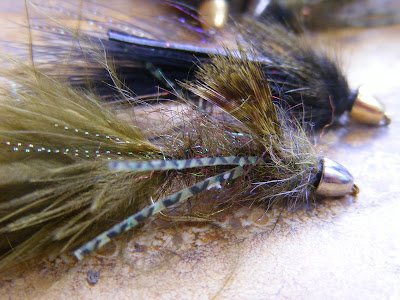 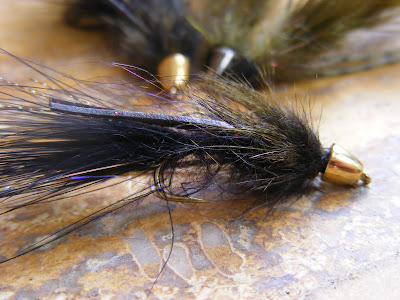 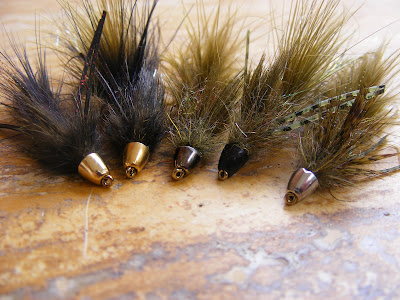 Here are the 3 wire spool comparisons, for the Performance Flies Branded Wire post. You can see how big of a difference there is between the 3 different manufactures.

I guess you can make your own judgement, on which is the better value. 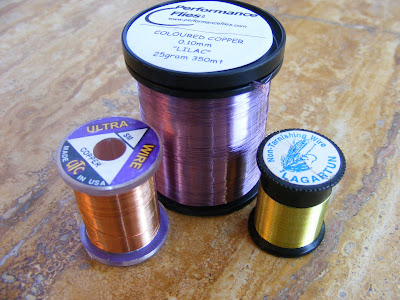 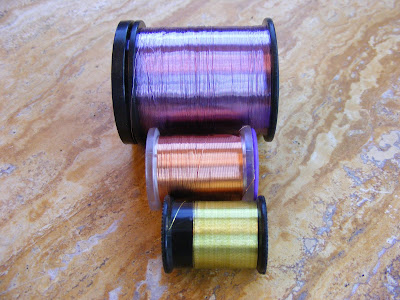 
I was able to make it out with for a fishing day on Sunday. I fished with Jim, Neal and Gin. Thanks gents for a great day and the stream side sushi lunch, was the topper. The fellas met at my house at 6:00 am and we loaded into the Subaru and headed west up I-70. No traffic and made it over Pass and into Winter Park in no time. The fellas had to stop and Mickey D's for a bathroom break and just pulling into the lot at the same time was a good friend of mine Scott and his family. They got run out of their campsite by a few bears, the wild strawberries are in full bloom.

Back on the road, we made it up to the stream, got geared up and hiked in. Only one other car in the parking area, which was a great sign, and only saw a few other people fishing the canyon all day, which was key too. The fishing started of a bit slow, but once I found a rig that was working, well it was pretty much over from that point on. Because I we couldn't do no wrong and lots of big healthy fish were caught.

I managed to catch a couple rainbows, a few little brookies, and bunch of browns. Had a great time. We got off the river about 5:30 and hiked out of the canyon and made our way back to the car and headed home. A few fish pics from the day, sorry they are out of focus, wasn't really keyed in to taking pictures. But managed a few. 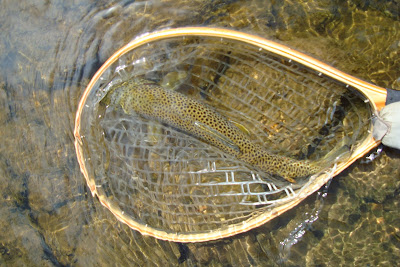 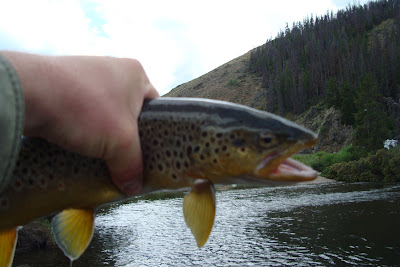 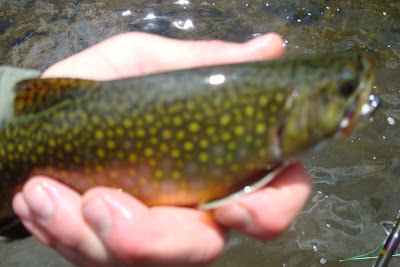 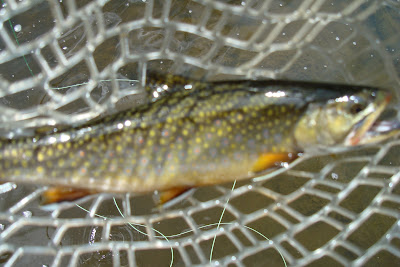 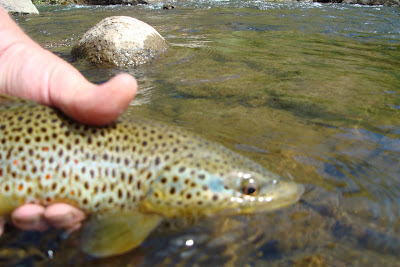 This product update is for the users of Wire.

There is colored wire from UTC and Largatun and maybe a few others... I know there are, but just can't think of them right now. Soo with that in mind...

Let me introduce to you to Performance Flies Branded wire. This wire is perfect for ribbing, brassie's, copper Johns and just about anything else you might use your wire for. This is an extra fine wire perfect for the midge tyer in mind. It is an 0.10mm which can be used on those Deep Poison Tungs by Craven, micro Johns, brassie's, dries, nymphs, double ribbed torpedo tungs by Compton, with out the added bulk. Also gives yer flies that added, but subtle flash, with out going overboard as well. Try weaving a few micro polish woven flies with this wire as well.

Notice the size of these spools. Each spool should last a life time for the average tyer and go along away for the professional tyer. These spools of wire are 25 grams, which is huge and will make thousands of flies. And get this the cost is $4.95 per spool. Which is a steel in my opinion.

So with that in mind, check out Performanceflies.com or give Kevin a call and get some wire, tying season is just around the corner. 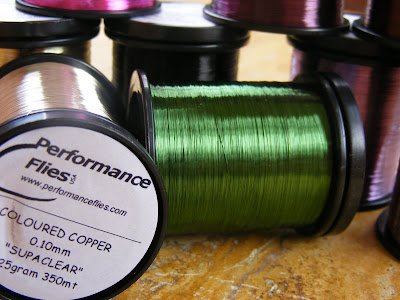 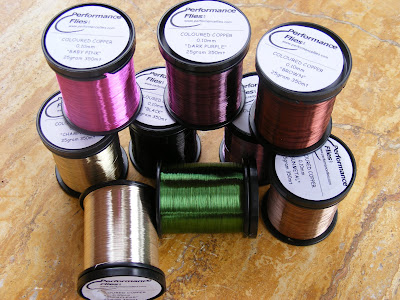 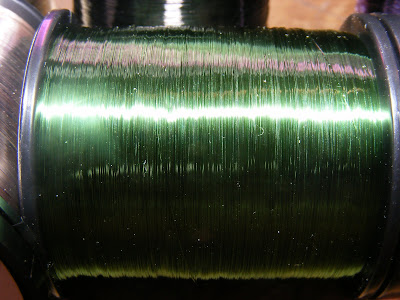 Where to begin. I have fished a bit through out the summer, but it hasn't been super high on my priority list. Have been saving for a trip later this fall with the wife to a little island in the Caribbean. I have fished the Frying Pan, Dream Stream, Yampa, Blue, Cheesy, Joe Wright Res, and 11 mile. Nothing to shocking or out of the ordinary there. I have brought the float tube on a few trips, but have yet to pump it up.

The Frying pan was high and muddy and flowing near a 1,000 cfs when we were there. We hit 11 mile before the high waters hit. Fished the dream at good flows and caught a bunch of fish, the blue, is the blue, Joe Wright was fun, caught a few grayling, which was a nice change of pace. Cheesy is the cheese as well and had a good time as always before the high water set in there. Went up to the blue a couple weeks back and forgot my wading boots, so attempted to fish the higher water in my chaco sandals. I really dont recommend that, unless you want banged up toes!

Took a family vacation up to Steamboat this past week and got out a few times during the week. The first afternoon I tried to fish just before town, but it was just below the main rubber hatch area and I spent more time dodging tubers, which wasn't all that fun, caught a few small cutts, before I decided to bag it.

Then a two days later I headed up towards Stagecoach, but didn't make it quite to it, I found a nice section of a mile and half of river that I had by myself for a while, before I ran into another angler who said he was up near Stagecoach, but it was packed with folks and he came down here, because it was open and no one was there but me. I had a great time in this section, landing and loosing fish after fish after fish, caught browns, cutts, and big bows. I lost a few big bruisers as well. I didnt have my camera, but had my Iphone on me and managed to snap a few shots with that, but I was too afraid that I was going to drop it into the river, so only broke it out a few times. Some of the photos of fish are below.

Then on Friday, we went to town mid day and walked around town and the kids were tired and the family wanted to head back to the condo for some rest and relaxation, so we went back to the truck and I put on my wading boots grabbed the rod and decided to work my way through town and work my way back to the condo. Spent a few good hours on the river, catching fish and dodging tubers. I managed, a grand slam this afternoon, with a cutt, brook, and few browns and bows to boot. Was a great time.

That is about the end of it. Nothing to spectacular, but some good times and well some off times.
Have a couple more trips planned in the coming weeks, but nothing big, just a bit of water time. 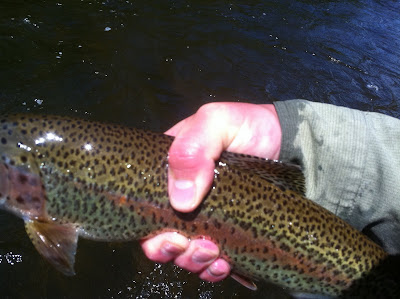 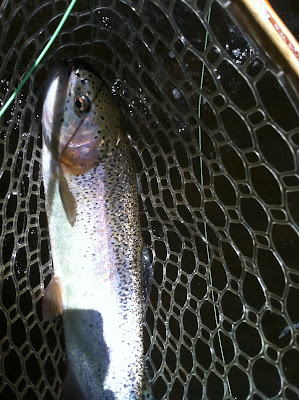 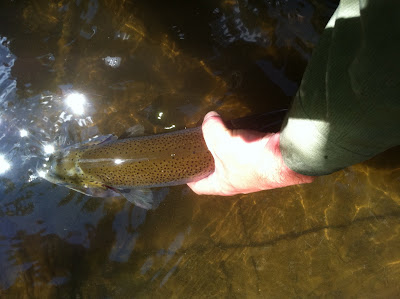 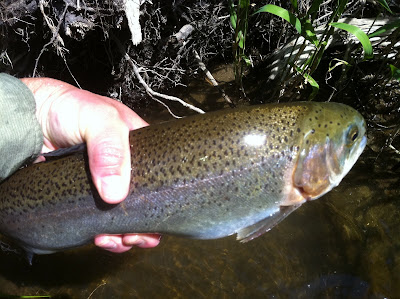