Ah, the Polweevil. What exactly is the Polweevil, well, I sat down at the vise the other night to begin working on a few new fly patterns, but wasn't quite sure what to tie. So I put a beaded hook into the vise and sat looking at the desk of materials. Hoping something will jump out at me. Nothing did, so I turned around and began digging stuff out from my fly tying box from the demo at Hook Fly Fishing shop from the week before and found some sand thread and began laying down the foundation. Added some lead to the shank and began to cover that up. The phone rang so I went to go answer it and low and behold as I was running up stairs to get the phone, the pattern hit me. I quickly ignored the phone and turned around and sat down at the vise. Tied in a piece of Amber Ultra Wire for the ribbing. Tied in the Glo-Brite Flosses. Green on the far side and Orange on the near side. Turned the vise and stared the Polish Weave. Ribbed the fly and tied that off and add the Turkey Biot wing pads. Yes the Polweevil was born. It is a mutation cross between the Davie's Evil Weevil and Vladi's Polish Nymph. I added a special blend of Squirrel and Angelina fibers with hints of UV in it and finished off the fly. The first fly was a little rough, because the idea was there, but laying down the fundamentals of the fly were a work in progress. By the time I was done, I had about a dozen twisted up and each and every fly looking better then the previous one. I was happy with the way the flies turned out and they should be real fish catchers here in the near future. They should work in all kinds of situations from Stoneflies, to large mother day Caddis and even some of the bigger mays later in the Season. I will test them out soon. But thought I would share, because I thought they looked buggy and had the elements to catch that lunker behind the rock that has eluded you for some time. These are the first two to come off the vise. They are not the prettiest of ties, but was thrilled at the outcome.
Happy Twisting.
The Polweevil 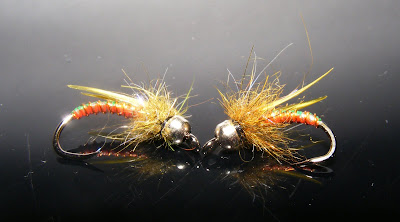 sweet pattern and a killer write up!

I love the biots. nice touch. I've been trying to start weaving but it's such a pain in the ass. Do you use the Aaron Jasper method with two bobbins or do you weave by hand?

Thanks Bigerrfish! Dub, Thanks, Yeah I used to use weave by hand, but the jasper/wotton method works so much better and you can easily keep the tension on the floss with out it slipping or breaking. I found it much hard to do by hand, but the two bobbin method makes it so much easier to do.

First time on your site! You tie some mean looking flies! Look forward to seeing some more!

Reelfly, Thanks for stopping by and checking things out. Thanks for the kind words.