Spring Break 2011. I have to admit, I really enjoyed spring break this year. Not only for the great company, but for all the activities that came with it. This year I took off the week that my kids were not in school and headed for the mountains of Steamboat for some Skiing, Snowboarding, Fishing, relaxing and chilling. We rented a condo with a few other families, and have to say this was not a normal condo. It was oversized and was able to fit 4 families into comfortably. We left Denver early Saturday and made your way over I-70 needing to take a little detour, because Rabbit Ears Pass was closed to an accident, so we went the long way around and really enjoyed the drive. After arriving at the condo, Jim unloaded his van quickly and I unloaded the truck quickly, and got the stuff up into the condo. After a quick dump and run, we blew out of there and headed down to the Yampa for some late afternoon fishing.
We found an area just before town that we wanted to fish and quickly got strung up and jumped into the river. It wasn't long before I had caught a beautiful Cuttie. Wished I had took a picture but I couldn't get to my phone buried inside my jacket, so I quickly released it and dug for the phone and moved it to my front wader pocket for easy access.
Fished for a little while longer and caught a few more fish, managed to take one picture of a nice brown that I had caught. 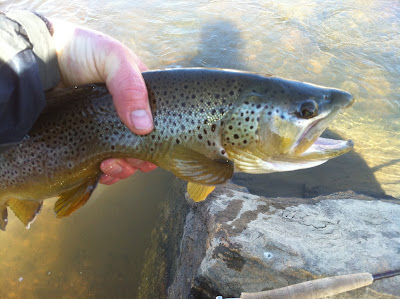 A bit later the sun had crept behind a mountain and the temp started to dropped so we started to pack it in, but not before making one last cast. I made the last cast and hooked into what I thought was going to be a pig, because it ran quickly and broke off, oh well. Will try again another day. So we called it a day and headed back.
The next day we put all the kids into Ski/Snowboard school, so we could all ride together and what a great day to be on the slopes. The snow was great there was fresh powder to be had. We took the gondola up and quickly rode down to the Storm Peak express and up to the Morningside Park for some powder action. We played in Morningside park for a couple of hours before making our way into the Chutes and bowls of Christmas Tree Gulley. The snow was great to be riding in here and took one nice run down here. 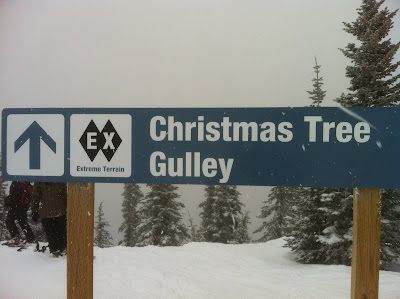 A stop for a late lunch and cocktail, we made a few more runs before we had to pick our kids up from ski school, so we headed down to the bar for cocktails. Woo Hoo. Packed it up for the day and headed back to the condo for dinner and hot tubbing.
Next morning we woke up, had coffee and breakfast and quickly packed up the fishing gear for a morning on the river. So Mac, Jim and I bolted out of the condo and headed to the river for some snow fishing. Got to the river and the area we chose we were the only ones there for a short time before more anglers decided to show up. No great stories to tell, but some nice healthy fish. 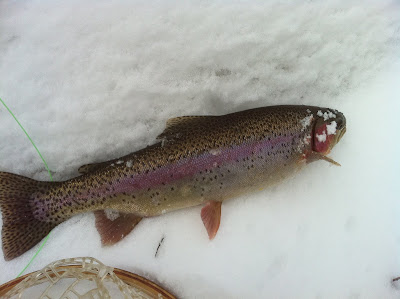 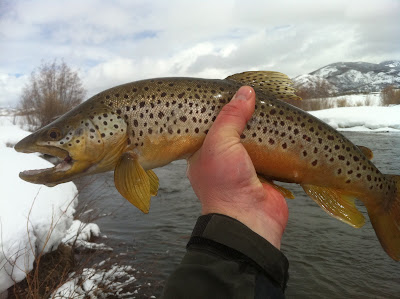 We only fished for about 4 hours before we had to be back at the condo for the girls to make their way to Strawberry Hot Springs and we were on children duty for the day.
The next day we woke to 2 feet of fresh powder, so a the night before we made plans for a few us to get up early and make first tracks and the others to round the kids up and bring them to the mountain for afternoon skiing. This worked out great because, Mac, Jim 2, Jenny, Jen and I were able to make it up to Stormpeak for first tracks. After a few powder runs with the girls, the boys and I broke away from the girls and headed into Morningside park for a quick run, so we could hike up to the no name chutes and bowls for one last run before heading down to meet the kids. And what a run it was, STEEP and DEEP and FAST. Made our way down to bottom to ski with the kids for the rest of the day. We all took a few family runs before meeting for lunch. After lunch the girls went off on their own, Jim 2 took Quinn and his girls for a few runs. And took all of them back to the condo and then it was my daughter Celia and I for the rest of the day. Her and I must have made about 20 runs that day. She was a super trooper on the slopes and couldn't get enough. It was great!
My little girl on dressed up.
. 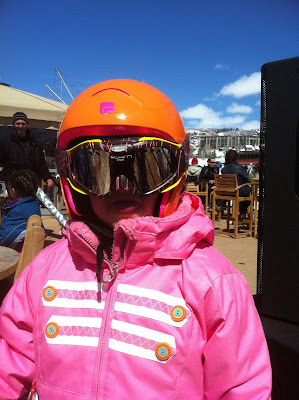 We had to pull out of Steamboat the next day to get back to Denver for the arrival of Jens mom and our niece, for a few day visit. Was able to get out and fish Cheesman on Friday. Nothing special here a few nice fish, great weather.
The weekend consisted of great weather and some fly tying on Sunday. Well that wraps up a great week of fishing, snowboarding, fishing snowboarding, driving, fishing, and fly tying.
On tap this weekend, float fishing Saturday followed up by cat skiing on Sunday.
Posted by Chad Gauerke at 8:54 AM

Jealousy! Steamboat rocks and I finally got to check out the Yampa for my first time last year. There are some BIG fish in that tiny river!

Bigerrfish, thanks, it was a great time. Tim.. Yeah, I agree Steamboat is awesome. I too love the Yampa, great little river.

Thanks for sharing Chad, good stuff!!