Here is a pattern that I came up with and tested out this past year on the water. It is a basic mayfly nymph and the colors and size can be adjusted to any color scheme to match Blue Wing Olives, Pale Morning Duns, March Browns, Drakes and Tricos.
The pattern is a very basic pattern with very few bells and whistles, but the bells and whistles that this fly does have is what makes this fly count. This is a year round pattern and can be sized differently as well as changing up the color scheme as noted above. The pattern has gone through a very thorough testing phase before I began showing it off recently at a few tying demos. This bug is one buggy bug and made to go in any fly box. The fly was responsible for bring many fish to net this year and will have a place inside my fly box for quite some time. It is one the best mayfly nymph patterns that I have used this year and has a very bright future in my fly box.
The pattern is called Euro Trash Adams or E.T.Adams for short.
I took the name from a Cracker Song called Euro Trash Girl.
Why the Euro Trash associated with it. Only because the most of the materials are of European descent from the Hook, Tail, Dubbing, Wingcase and Lacquer.
The Guts and Glory of the fly
Hook: Partridge CZ hook #16
Tail: Coq De Leon
Rib: Vinyl rib (as an added attractor add a small gold wire for double rib).
Body: Mixed dubbing grey and tan hare
Thorax: Siman Peacock UV Green Dubbing with chopped up deer hair from Fly DK
Wing Case: Siman Magic Shrimp Foil (I give the wing casing a little slab of black marker and hit it with Hends Lacquer Olive.
Wings: Partridge or as the top left corner fly has some medallion sheeting for the wings under the partridge. Works great as an Emerger.
Thread: Black
This bug is tied reversed hook point riding up. 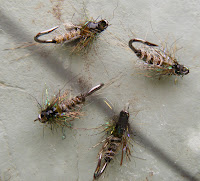