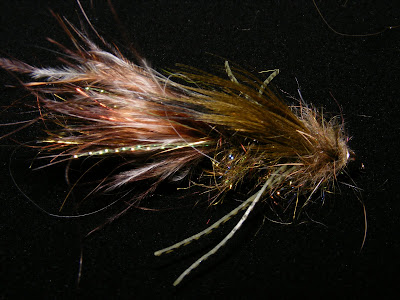 This pattern has been a pattern that I have tweaked and re-tweaked and continued to alter over the years. It has been one of my most consistent flies that I have ever tied. When I first developed this guy many years ago. It was a just a simple take off the Woolly Bugger with some of my own twist thrown into it for good measure. It has mutated itself over the years, by adding this or that and taking away this or that. I have combined this and that too over the years, just seeing what works and doesn't work. Lucky for me, all the different versions that I have created over the years have caught fish and a lot of them too boot.
In tweaking the pattern over the years, I have always stayed true to a key ingredients of the fly. Those key ingredients are the just a few of the keys to this fly. Streamer hook, Tungsten Cone, Marabou Tail, silli-legs and wire under-body to make it heavy and sink like a rock. I have always kept the profile slim so it will slice through water and gets down fast.
The few ingredients that have changed over the years has been the flash in the tail or along the side of the body. The body material itself, but I have always kept the body shaggy and buggy as I could using dubbing with longer and shaggier fibers to give it action. I have wrapped hackle around the body, like the true wooly, but I always thought wrapping the hackle around the body of this fly took away from the dubbed body and the shagginess that it had. So I have stirred away from the hackle. I have experimented with the thorax and collars too over the years. I have given it different styles of wings from your classic matuka streamer wet wings to jungle cock wing pads to zonker strips.
I also have played with the colors scheme of this pattern as well, but there is one color plate that I keep going back to and tying every year. The choice color that seems to work year round and in tailwaters, still waters and running water is Olive. After my last few outings, I was starting to get low on a few colors of the pattern so it was off to the spooky dungeon man cave of my house to begin twisting them up.
With this batch came a few new twist that I have yet to incorporate into the pattern yet. Instead of diving right into the pattern, I played around with a few ideas I had bouncing around my head for sometime. But after I twisted up the ideas, I didn't care too much of the results and now knew, what I didn't want to put into the pattern. So I was set. With this batch I decided to go with slightly bigger streamer hook then in years past. I also added some new flash into the tail that I had used on the Platte River Apprentice flies, opting for the Rusty Olive Angel hair. This gave it a nice amount of under flash with the marabou over it. I continued with the 3/4 strands of krystal flash on each side of the tail as well.
Next up was the body. Sometime last year I whipped up an Olive blend of dubbing that I had titled Psycho Olive for Bunker Bombs. Looking back it must have been sometime last spring when I was, well replenishing this fly, but never got to using this blend. Twirled it up in a dubbing loop, twisted it on the hook and gave it a quick brush to shag it up.
Put in the silli-legs and now came for the next part. This is where I wanted to give it something new that I have yet to put in it. I mentioned before I have put Zonker strips in it, as well as jungle cock and various Matuka style feathers. So I had to come up with something new for my little fly here. I started digging around the vast amount of materials I had and when it hit me, to go for a double whammy here. I decided to use Black Ice Angel Hair underwing and Mallard for the overwing. The Thorax/Collar blend is a mix of European Hare Skin Le Lievre, Jack Mickievicz Masterblend of Rainbow Warrior Peacock Olive dubbing and a touch of the Psycho Olive Bunker Body Dubbing and a few have bits and pieces of mallard. Yes, I know it seems like a lot of stuff going on here, but it just pops and gives the thorax/collar a neat look to it. 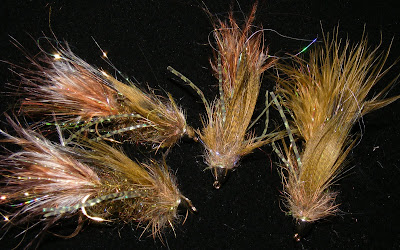 looks cool, the angel hair makes for a nice contrast.

Thanks Bigerrfish. I need to reshoot the photos for these with a different background.

Thats really cool it has been changing year after year. I have only been tying 8 months so I have not had the yearly change yet. I do like the angel hair in it and need to pick some up. I have never used the material before