Fished the Blue River at Palmer Gultch this past weekend. This is the first time I have made it down to Palmer Gultch in a few months. I enjoyed a the drive up there after dropping my kids off at day care. Had a few cups of joe for the road, some Massive Attack for the tunes along with some Janes Addiction.

Was surprised at the pull offs along the Hwy, all most of all of them had cars in there. Thought it was going to be crowded day on the river. But got up to Palmer Gultch and the first bunch of car parks were empty and the lot was pretty full. I looked at the river from bridge up stream as far as I could see and no one was on the river. Hoped in a whole I call Big Boulder, but there were a few folks who must of just stepped in the river right before me. I could not see them from above. I moved up stream a little way with about hundred yards or more between us. I didn't see any fish rising when I got to the river, but I saw a nice sized boulder that had a decent size pool behind it. I made my way up river a tad and got myself into position and made a two cast in front of the boulder and didn't care for my cast. Let out some more line and made my cast about 20 feet in front of the rock and started to let the drift happen, just as I thought I wasn't getting a good drift, I began to pull the line out of the water and make a new cast. As I began to pull the line, the streamer made its way to the top and I began to skate it off across the top before completely pulling and making a new cast when all of a sudden, all I saw was a monster of a head make its way on to fly, fly gone, line tight, bend in the rod and a fight was on. The fish made two leaps out of the water and I was shocked by its size and it swam down stream. I let out a yell of enjoyment and help please. One of the gents fishing down stream from me saw I was making my way down stream and he made is way up stream, when I yelled down to him and asked if would mind netting my fish. We netted the fish and said that is one of the biggest fish I have seen in this area in a long time. We put a tape measure to it. 26"3/4 long, with a girth of about 16" and about 9 lbs. Big Brown!!! Welcome to fall. Released the fish back into the water, guy asked what did he take, showed him my new bunker bomb streamer. He liked and was surprised that the fish took a streamer. I said they take them all the time down here, this is a really good body of streamer water. We also talked how the big fish probably made its way out of Green Mtn Res. Said our goodbyes and good lucks and I started to make my way up stream.

Did really well until I made my way just around the first big bend and the fishing kinda of turned off. So I decided to get out and walk down below the bridge on the other side for awhile. Got in just before the bridge and fished above, under and below the bridge. Caught several nice bows and two snake river cutts. Didn't see any Kokes up this way yet though. I made my self around the bend and fished the first fast deep pool at the beach and didn't even scare a fish in there.

Then the thunder and rain came. So I decided I would head back to the truck and make my way up stream towards the dam for two hours, but when I started walking back to the truck, I was looking down at the river and saw the river come alive fish were jumping every. Made my way down to the river and started to try my regular set up. Not even a hit or an interested fish, cause they were taking emergers of some sorts. So I quickly cut line and started going through various small, BWO and Midge dries and mergers. Finally got set on a size 24, white and grey adult juju. And that's when they are starting taking it on the top. For the next hour until the rain and wind stopped, every cast, every other cast I hooked a fish. Didn't land them all, but Hooked a ton. Then the sun came back out and it someone turned the off switch. Sat around trying for about another half hour and nothing was on at all. Packed it up and drove home. Great day to fish and almost a full day that needed to be had.
Posted by Chad Gauerke at 7:20 PM No comments:

Fished the Deckers area on the South Platte tonight for the first time since Spring. The flows were above 400. Hatches, Tricos, Caddis, Midges and Midges. Didn't see any fish rising. Worked the shoreline, slack water, and the deeper slow pools. Fished from 5:30 till 8:00 pm and caught about a dozen or so fish. Nothing was smaller then 16". I did see one fish that was pushing around 24" that is sitting next to shore. Its mouth was pretty beat up and looked this fish has gone through hell. But when I got close to it, it took off into the faster water.

My set up for this evening was my CQ Little Brown Trout trailed by various stuff. I tried Czech Nymph, Jujubees, Barrs BWO emerger, RS2 and a new no name fly I tied this past weekend. All fish took the streamer.

All in all it was a good night to get out and wet a line and catch a few fish.
Posted by Chad Gauerke at 10:37 PM No comments: 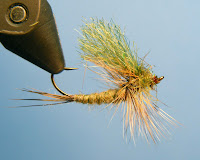 Posted by Chad Gauerke at 7:00 PM No comments:

Well Fall is around the corner, the weather has begun to change. The days are shorter and getting shorter. I am ready for the cool crisp air of fall. Been thinking Hoppers, Tricos, Small BWOS, Streamers, Eggs and October Caddis the last big hatch of the year. Fall Brings Brown Spawers, Kokanee Salmon, big Rainbows following the Kokes and gobbling up their eggs. Yum.

The time is now to experience the best fishing of the year.
Posted by Chad Gauerke at 9:45 AM No comments: