Is fall really in the air. The kids went back to school the other day, the night time cooler temps only mean one thing. Streamer Season is just around the corner. Those who fish with me know I use streamers all year long. The bigger flies produce bigger fish at times. So the last few weeks I have been thinking up some new streamers for fall. So this past week I tied up a bunch of articulated streamer patterns to give a shot. I tied up my first prototype with out the articulation to get my proportions and all the bells and whistles right, before moving on to the articulated one. After a few tinkerings here and there I was able to make the articulated Apprentice. The Apprentice is an off shoot of my original bunker torpedo and the circus peanut dressings, but tinkered into my own fly of pure trout evil. Why do I call it pure trout evil, because this thing is pure evil. I don't know if it was dumb luck, stupid fish, or whatever, but I managed to get out this past weekend and hiked into Cheesman Canyon. I got to the canyon for an early start. I managed to make it down to the water by 6:20 am. I got to a spot where I like to start fishing and work a section of the river before hiking further back. I had the new rod put together, and tied on my new streamer the Apprentice. At this point I didn't tie any droppers on, just wanted to give this bad boy a few cast and see it flow through the water. Okay, I got my line out and made my first cast and was getting ready for the drift, but the thing didn't have any time to drift, because as soon as it hit the water, I nice very thick, 18" rainbow slammed it. The line went tight and the rod was bent. Since this was the first fish with this rod, I wanted to get the feeling of the rod and loosened up the drag and let the fish take off. I don't know if that was a good thing or not, because it ended taking me a while to get the fish back in. After about 10 minutes I landed, revived and released the fish back into the waters of the South Platte.

Getting ready for the next cast, I moved up a few feet from my first drift to work a nice piece of faster pocket water. The flows were beautifully at 356 cfs which is much better then the 96 cfs we usually see at this time of year, but with the work going on at the dam the water temps where much warmer then normal. Getting myself ready for the cast, made my decision on where I was going to put the fly. The fly hit the water, I made an upstream mend and the line went tight! After a few minutes landed a 21" bow. Two cast, two fish, on the new rod with the new fly. The stars must be aligned for me today I was thinking. Worked a few more pockets and runs that I like in this section and another 6 fish later I was ready to hike up stream a bit. All fish took this new articulated streamer I developed earlier this week.

Back to the fly itself, The Apprentice 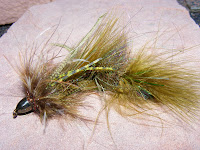 To articulate the streamer. I take a heavy mono filament and feed through the hook like you would be tying it normally. Then I take the two strands of the mono and tie to each side of the main hook shank and wrap it good and cement it and begin the second portion of the fly. Once the fly is completed, I snipe off the hook of the main fly and now you have a really great articulated fly.

Here is another color variation. I titled the Majestic, with some minor flash subsititutions.
But a great purple/black streamer for those overcast days that lie ahead in the coming months. 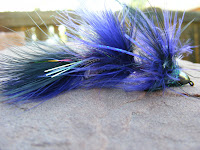